Applesauce Brownie is eggless brownie which is moist and decadent with hint of Cinnamon. Served with a side of ice cream it’s a gooey recipe.

Weaning a baby is fun & frustrating at the same time. I’m dreaming, sleeping, walking, talking brownie these days. Thanks to all the wonderful entries so far! I thought why not eat a brownie too so I made one just to enjoy the fun of the contest.

I chose a recipe from Bakin’ without Eggs by Rosemarie Emro. I’ve earlier baked delightful Black forest Cake & superwhite Silver White Cake from the same book. This time I adapted the recipe quite a bit & changed it to suit my need. I replaced vinegar with apple cider vinegar. I also made unsweetened apple sauce in place of sweetened apple sauce. I added a little bit of ground cinnamon to highlight & compliment the apple flavour. I also halved the recipe & replaced APF with 3/4 cup multigrain flour & 1/4 cup of quick cooking oats. I skipped light corn syrup.

In my first attempt I made the same recipe in full measure using my 11 x 7 x 1 1/2 inch Pyrex dish, but the baking time increased by double & I ended up caramelizing the sides & to make matter worse sliced it using a serrated knife. If this wasn’t enough I sliced them warm too :( I braced myself & gave them a second shot with half recipe as the taste was very good first time even in the caramelized state.

The brownies were very rich, delicious, chewy and loads of moistness, just as a nice brownie should be. It rose beautifully & uniformly. They were beautifully fudgy. I baked at night & allowed it to cool & firm up till morning. I ate with a scoop of vanilla ice-cream and a drizzle of yummy chocolate sauce. The umpteenth benefit of working in peace & doing some food photography, you get to eat the dish all by yourself! ;)

Applesauce Brownie is eggless brownie which is moist and decadent with hint of Cinnamon. Served with a side of ice cream it's a gooey recipe.
Prep Time15 mins
Cook Time30 mins
Total Time45 mins
Course: Baking
Servings: 10 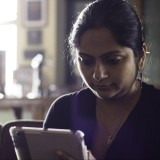